Car rentals. We’ve all heard (and possibly experienced) the nightmare stories. Recently I had an annoying experience with a Spanish car hire company, but a little twitter research suggested I was one of the lucky ones. But this isn’t a rant about car hire – far from it. Yes, there is a link to car rental – but I’ll come to that.

I have to say I’m a fan. I’ve done it on occasion, but I don’t really have the right assets. Now get your mind out of the gutter – I’m talking about cars for heaven’s sake… look at the title on the blog.

Convertibles are now seen as a luxury item, but in fact, back in the early days of motoring, they were very much the norm. Some recent research by Enterprise (there’s the car rental link) looked back at more than 100 years of topless motoring, and threw some light on the early days. I’ll be honest, I’m a big car fan (no surprise there) but I didn’t really get that in the early days, convertibles were the norm… Saloon cars became more popular in the 1920s, but before that, folding roofs were standard – the defining gadget for a convertible.

The research highlights some awesome cars that I was aware of, but had forgotten about, simply because you don’t see them around – but that’s no excuse and I shall dedicate more time to study of the classics in the future.

As well as the lines, which were simply gorgeous, the names were iconic in themselves. Some we will still recognise today (although the styles have changed somewhat) but some just aren’t on the radar. To name a few from the 1910-35 period: from the Ford Roadster, the Peugeot 601 Eclipse (stunning) and the Mercer Raceabout – that’s a hell of a name – to the Stutz Bearcat – sounds like it would tear up and down the streets in a flurry of tyre smoke, doesn’t it?

Aside from the names, the looks were simply amazing. Not just the lines, but the shear amount of chrome involved, and the coachwork – everything designed to look good, not necessarily functional, unless the function is to look good. Few manufacturers do that now.

Yes, aerodynamics are now developed with computer aided design wind tunnels and active diffusers, wings etc. all contribute to the effect, but that doesn’t necessarily mean the car will look good. There are some exceptions – the McLaren 570S I reviewed a few months ago for example – but just look at the Porsche 365 Speedster of the mid 1950s, or the early 50s Jaguar XK-120…

Then there’s the American offerings from the late 50s… Chevrolet had the shark-like Corvette, the bug-eyed Bel Air (think 1950s Miami, and you have a good mental image for that one). Then moving back to Europe for the 1960s, the iconic E-Type, and one of the most expensive convertibles ever: the Ferrari 250 GTC California. One auctioned recently for more than $15 million dollars. That’s a lot of money for a car that you’d be scared to drive… imagine the insurance!!!

Moving through the 60s, the Shelby Cobra was an amazing collaboration between England and America – it sounds awesome and looks like power personified… into the 70s and things got a little more subtle – sleeker lines, prominent noses… look at the Ferrari Daytona or (one of my favourites) the 1963-71 Mercedes 280SL Pagoda. Why is it one of my favourites? Because when I was 15 my Dad owned one and would always drive through the most populated areas when we were going anywhere. 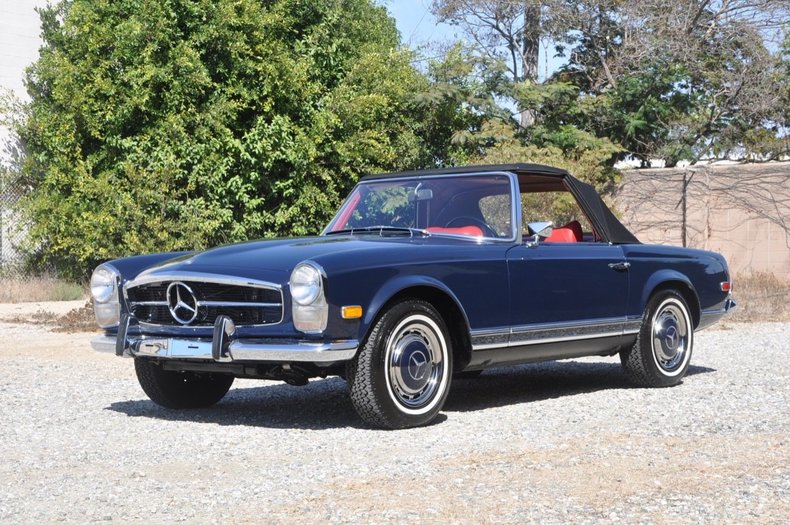 The 80s (in my opinion) were somewhat of a dry patch in terms of convertibles, and even though the early 90s Mazda MX5 is nice, it doesn’t scream ‘classic of the future’ to me.

But then came the beasts – the power houses – the Honda NSX from Japan, the Dodge Viper from the USA, and of course the beautiful Aston Martin offerings – there are a number that are simply stunning – from the DB7 to the DB9 – there isn’t an Aston I wouldn’t love to own.

Whether this will continue I don’t know… one of the most recent times I’ve gone topless was in a Range Rover. The new Evoque convertible… I did like it – but I don’t think it’ll feature in an equivalent blog in 50 years time.

So why did Enterprise commission this research? I thought they did budget rentals (albeit with great customer service) – maybe a few high-end options, but nothing with a topless option. Quite simply, the reason for their research was that I was wrong.

The Exotic Car Collection by Enterprise gives you the chance to rent some truly beautiful cars; modern classics from the likes of Aston Martin, Bentley, Ferrari, Lamborghini. So why not?

For me, it’d come down to price, but if you’re looking for a treat for someone, then get down to Enterprise!

Have a look for yourself – the infographic below shows their research, so they’ve looked at what’s important and they have some properly lovely cars in their portfolio, so take a look at https://exoticcars.enterprise.co.uk and see for yourself.

I am a husband and father of two. I'm a writer, PR person, hockey player, creative type and lover of wine, The Big Bang Theory and Top Gear / The Grand Tour. I hate grammatical errors, although I make them too. I live with my beautiful wife and kids in Gloucestershire, having grown up in rural North Devon. I discovered my love of writing some time after graduation, and have been working in PR and communications for more than 10 years. I've been reviewing cars for a number of magazines and websites since 2015 and still get ridiculously excited about a new car delivery, regardless of what it is! View all posts by tbaiken